This is not meant to be a sombre post at all, rather I am sharing how I have tackled what I think is one of the more difficult concepts for young children, that of people dying.

I am a scientist by training, a fact is a fact. So I always like to tell the truth. On the flip side I love to indulge the imaginary – Father Christmas/Santa Claus, the Easter Bunny, and the Tooth Fairy (not yet required and apparently I will have to take out a mortgage for how much you get a tooth these days!) are alive and well in our house. And I will be endeavouring to keep them believed for as long as possible. However the opportunity to broach death for the first time presented itself.

When I returned my almost but not quite yet 5 year old asked why I had gone (she also told me she had missed me), to which I replied that I had been supporting my sister, which was swiftly followed by why? Having thought I would not say anything yet about death, in that moment it just seemed like the right thing to say. And so I explained, remember Uncle C, the man with the funny glasses (on Skype he would always put on fake glasses with a false nose to talk to her) well he has died, he has gone to sleep for ever; and I went home to support Aunty C. Supporting my sister seemed to make sense to her. However she did double check – “he isn’t going to wake up?“

Sitting on the stairs was a copy of the funeral service with his photo, and when we walked up I asked her who that was. She said “that’s Uncle C but he’s dead“, in that kind of dismissive, I am not interested in him anymore tone. Not long after, “where is he if he has gone to sleep for ever?” For now I have suggested he is a cloud in sky, to which she asked, “which one, how do we know which one is his?” Great question, fortunately I got away with we will have to look. There has been a few ‘dead’ comments, lots of her toys have died, but nothing too serious, and the topic has now faded away.

So for anyone about to broach this topic, I do not think there is a right or a wrong time, nor a better or a worse time, simply opportunities will present themselves and you take the one that feels right for you. And if you have some tips for what to say when “the cloud” notion no longer cuts it, I would be glad to hear them. 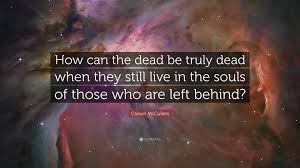 2 replies to How do you tell small children about death?